“Our vocation is to go and enflame the heart of men, to do what the Son of God did, He who brought fire into the world to set it alight with His love. What else can we wish for, than for it to burn and consume all things?”

Today we celebrate two great saints; St. Louis IX and St. Joseph Calasanz. St. Louis IX was King of France in the 13th century, having become king at age13. Throughout his reign, St. Louis defended justice and promoted peace. He organized ‘the court of the king;’ bringing regular reviews of feudal cases. He prioritized the poor; founding many hospitals and charitable organizations. Also, he loved architecture; supporting the famous Sorbonne University and the Sainte Chappelle, the ‘Holy Chapel’ known for its architectural complexity with stained glass. He was canonized in 1297 by Boniface VIII.

Rising from the ashes,
Pledging nevermore.
Hell, a people to encumber 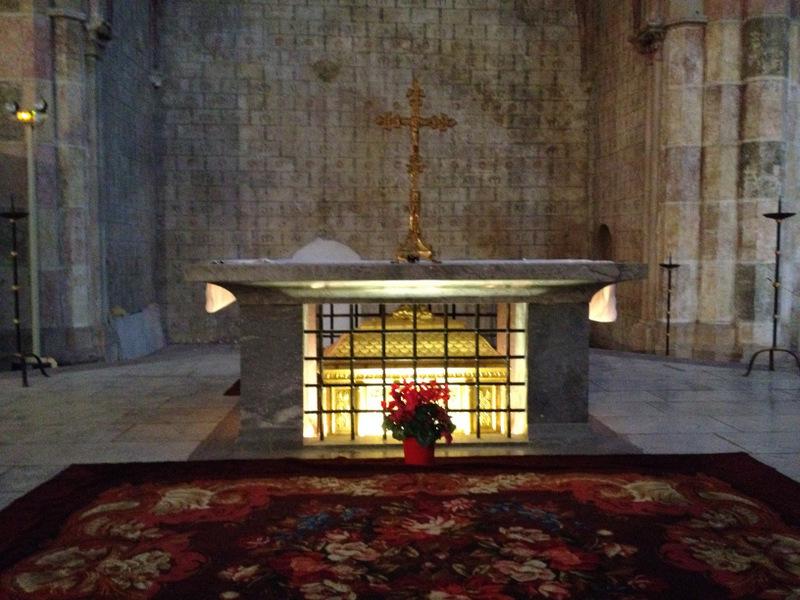 Relics of St. Thomas Aquinas at the Jacobin Church in Toulouse

For human beings perfection is found in discipleship to Christ.

St. Thomas Aquinas was born in Aquino, Italy, in 1225, the youngest son of Count Landulf. St. Aquinas received his education at the Abbey of Montecassino and at the University of Naples. In 1244, St. Aquinas entered the Dominican Order. He traveled to Paris and Cologne, studying under St. Albert the Great. He became a Master of Theology at Paris and subsequently, taught there and in Italy. He wrote a series of commentaries on the newly translated works of Aristotle to guide Christians in their reading of them. He wrote the Summa theologiae and much of the liturgy for the feast of Corpus Christi. He was declared a Doctor of the Church in 1567 by Pius V who called him the Doctor Angelicus. [2][3][4][5]

Reblogged because today February 15th is the birthday of this amazing heroine of Poland’s Jewish ghetto during the Holocaust.  Never forget! Never Again!

“Ms. Sendler has been called the female Oskar Schindler, but she saved twice as many lives as the German industrialist who sheltered 1,200 of his Jewish workers.”

Look at this woman – Let us never forget!

The world hasn’t just become wicked…it’s always been wicked.
The prize doesn’t always go to the most deserving.

Irena Sendler
Died 12 May 2008 (aged 98)
Warsaw , Poland
During WWII, Irena, got permission to work in the Warsaw ghetto, as a plumbing/sewer specialist.
She had an ‘ulterior motive’.
She KNEW what the Nazi’s plans were for the Jews (being German).
Irena smuggled infants out in the bottom of the tool box she carried and she carried in the back of her truck a burlap sack, (for larger children).
She also had a dog in the back that she trained to bark when the Nazi soldiers let her in and out of the ghetto.
The soldiers of course wanted nothing to do with the dog and the barking covered the infants’ noises.
During her time of doing this, she managed to smuggle out and save 2500 children/infants.
She was caught, and the Nazi’s broke both her legs, arms and beat her severely.
Irena kept a record of the names of all the kids she smuggled out and kept them in a glass jar, buried under a tree in her back yard.
After the war, she tried to locate any parents that may have survived it and reunited the family.
Most had been gassed. Those children she helped got placed into foster family homes or adopted.
Last year Irena was up for the Nobel Peace Prize.
She was not selected.
President Obama won…………….

According to the Norwegian Nobel Committee in Oslo, President Obama won the 2009 Nobel Peace Prize for his “extraordinary efforts to strengthen international diplomacy and cooperation between peoples”. {What do you think? Has he brought peace or division?  Al Gore won also…trumped the more than 3,000 lives saved by this woman when you include the adults she also saved and not mentioned here}……………………

Now, more than ever, with Iran , and others, claiming the HOLOCAUST to be ‘a myth’.
It’s imperative to make sure the world never forgets, because there are others who would like to do it again.

LOS ANGELES – Irena Sendler, a Polish Catholic social worker whose ingenuity and daring saved 2,500 Jewish children from extermination in the Holocaust, a feat that went largely unrecognized for 60 years, died yesterday in Warsaw. She was 98.

She had been hospitalized since last month with pneumonia, according to Pawel Maciag, a spokesman for the Polish embassy in Washington.

Ms. Sendler has been called the female Oskar Schindler, but she saved twice as many lives as the German industrialist who sheltered 1,200 of his Jewish workers. But unlike Schindler, whose story received international attention in the 1993 movie “Schindler’s List,” Ms. Sendler and her heroic actions were almost lost to history until four Kansas schoolgirls wrote a play about her nine years ago.

“One person can make a difference,” Megan Felt, one of the students who wrote the play, said yesterday of Ms. Sendler.

“Irena wasn’t even 5 feet tall, but she walked into the Warsaw ghetto daily and faced certain death if she was caught. Her strength and courage showed us we can stand up for what we believe in, as well,” said Felt, who now helps raise funds for aging Holocaust rescuers.

Ms. Sendler was born Feb. 15, 1910, in Otwock, a small town 15 miles southeast of Warsaw. She was an only child whose parents raised her to care about those in need. “I was taught that if you see a person drowning, you must jump into the water to save them, whether you can swim or not,” she told the British newspaper Express in 2005. She was especially influenced by her father, a doctor who defied anti-Semites by treating sick Jews during outbreaks of typhoid fever. He died of the disease when Ms. Sendler was 9.

She studied at Warsaw University and was a social worker when the German occupation of Poland began in 1939. In 1940, after the Nazis herded Jews into the ghetto and built a wall separating it from the rest of Warsaw, disease, especially typhoid, ran rampant. Social workers were not allowed inside the ghetto, but Ms. Sendler, imagining “the horror of life behind the walls,” obtained fake identification and passed herself off as a sanitary worker, allowed to bring in food, clothes, and medicine.

By 1942, when the deadly intentions of the Nazis became clear, Ms. Sendler joined a Polish underground organization, Zegota, recruited 10 of her closest friends and began rescuing Jewish children.

They smuggled the children out in boxes, suitcases, sacks, and coffins, sedating babies to prevent their cries. Some were spirited away through a network of basements and secret passages.

Decades later, Ms. Sendler was still haunted by the parents’ pleas, particularly those from families who ultimately could not bear to part from their children.

“The one question every parent asked me was, ‘Can you guarantee they will live?’ We had to admit honestly that we could not, as we did not even know if we would succeed in leaving the ghetto that day. The only guarantee was that the children would most likely die if they stayed.”

Most of the children who left with Ms. Sendler’s group were taken into Catholic convents, orphanages, and homes and given non-Jewish aliases. In the hope that she could reunite them with their families later, Ms. Sendler recorded their true names on thin rolls of paper. She preserved the precious scraps in jars and buried them in a friend’s garden.

She was captured by the Nazis in 1943 and tortured but refused to tell her captors who her co-conspirators were or where the bottles were buried.

During one particularly brutal torture session, her captors broke her feet and legs and she passed out. When she awoke, a Gestapo officer told her he had accepted a bribe from her comrades in the resistance to help her escape. With her name on a list of executed prisoners, Ms. Sendler went into hiding but continued her rescue efforts.