It’s time once again for Sunday Snippets. We are Catholic bloggers sharing weekly our best posts with one another.

Join us to read and/or contribute.

To participate, go to your blog and create a post titled Sunday Snippets–A Catholic Carnival. Make sure that the post links back to here, and leave a link to your  snippets post on our host, RAnn’s, site, This, That and the Other Thing.

In answer to this weeks question: I love my parish for its “dynamic orthodoxy”. When I first attended Mass there, I was blown away. It was a weekday, no special holy day, and the church was packed . I had to ask if something special was going on. The sister I asked didn’t seem to understand, because for her and this bunch, it was just another day and just the way things were everyday in this parish. I have since found it so, daily.

My Posts for the past week:

Make of Me a Vessel

This is my fond memory of Fr. Groeschel.  He was a mensch. 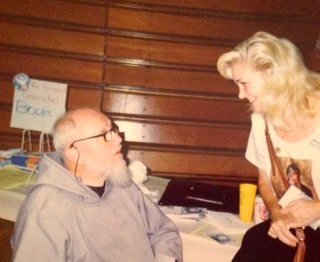 via Fr. Benedict Groeschel passes away at 81 :: EWTN News.

Fr. Benedict J. Groeschel, author, former EWTN host, and one of the founders of the Community of Franciscan Friars of the Renewal, passed away at 11:00 p.m. on Oct. 3. He was 81 years old.

“The Catholic Church and the Franciscan family lost a giant today,” the friars said in an Oct. 4 statement, expressing deep sadness at Fr. Groeschel’s loss as well as relief “that God has set him free from the physical and mental suffering he has experienced over the past decade.”

Fr. Groeschel was one of eight Capuchin friars in New York City who helped found the Community of Franciscan Friars of the Renewal in 1987. The community is committed to poverty and evangelization.

Known for his love of the poor, he founded the St. Francis House for the homeless and Good Counsel Homes for pregnant women in crisis. He also directed Trinity Retreat House in Larchmont, New York, and taught at the Dunwoodie seminary.

In addition, he became known as an author and preacher. For more than 25 years, he appeared on EWTN, hosting “Sunday Night: Live with Father Benedict Groeschel,” among other programs.

“The world knew Father Benedict as a priest, teacher, evangelist, retreat master, and a steadfast defender of and advocate for the Catholic Church that he loved so much,” the friars said, adding that while his religious family saw these traits, “we were also blessed to know him as a father who cared for each of us, a father who was always accessible when we needed him and always glad to see us when we came to visit.”

“Fr. Benedict was a brother and a father to everyone he encountered,” the friars continued. “In a world often overwhelmed with darkness, he was a man filled with hope, a hope that he shared with both the rich and poor alike.”

via Fr. Benedict Groeschel passes away at 81 :: EWTN News.

via Archdiocese of Washington

The movie “Left Behind” opens today. And while, in a secular culture dismissive of any consequences for unbelief, we can rejoice in any salutary reminders, it is unfortunate that the reminder is riddled with questionable theology and dubious biblical interpreation.

In certain (but not all) Protestant circles, and especially among the Evangelicals, there is a strong and often vivid preoccupation with signs of the Second Coming of Christ. Many of the notions that get expressed are either erroneous or extreme. Some of these erroneous notions are rooted in a misunderstanding of the various scriptural genres.  Some are rooted in reading certain Scriptures in isolation from the wider context of the whole of Scripture. And some are rooted in reading one text and disregarding others that balance it.

The Catholic approach to the end times (eschatology) is perhaps less thrilling and provocative. It does not generate “Left Behind” movie series or cause people to sell their houses and gather on hillsides waiting for the announced end. It is more methodical and seeks to balance a lot of notions that often hold certain truths in tension.

I thought it perhaps a worthy goal to set forth certain principles of eschatology from a Catholic point of view, since the movie “Left Behind” is bound to generate questions among fellow Catholics.  Most of the teachings offered in this post are drawn straight from the Catechism and the Scriptures. What I offer here I do not propose to call a complete eschatology, only a sketch of basic principles rooted right in the Catechism of the Catholic Church.,,,,,,,,,,,,,,read more. via Archdiocese of Washington

Here is a poem written by my mother:

Soul in Flight in Search of Peace

Father, dear, in search of Thee,
My soul has wandered over land and sea,
And when I could not find You there,
I climbed the stars and celestial spheres.

Hither and yonder, I looked about,
But the angels told me that You were out.
So, back again, to earth I went,
My soul, so utterly discontent.
I searched the attics and the eves.
I looked for You among the trees.
In valleys, low, and mountains, high,
I climbed the rainbows in the sky.

Lost and lonely, I wandered home.
And it was there, I found You enthroned.
Why did I search for You far and wide,
While here You sat by my fireside?

…”During the Middle Ages you could not find a Christian in Europe who did not believe that the Crusades were an act of highest good. Even the Muslims respected the ideals of the Crusades and the piety of the men who fought them. But that all changed with the Protestant Reformation. For Martin Luther, who had already jettisoned the Christian doctrines of papal authority and indulgences, the Crusades were nothing more than a ploy by a power-hungry papacy. Indeed, he argued that to fight the Muslims was to fight Christ himself, for it was he who had sent the Turks to punish Christendom for its faithlessness. When Sultan Suleiman the Magnificent and his armies began to invade Austria, Luther changed his mind about the need to fight, but he stuck to his condemnation of the Crusades. During the next two centuries people tended to view the Crusades through a confessional lens: Protestants demonized them, Catholics extolled them. As for Suleiman and his successors, they were just glad to be rid of them.

It was in the Enlightenment of the eighteenth century that the current view of the Crusades was born. Most of the philosophes, like Voltaire, believed that medieval Christianity was a vile superstition. For them the Crusades were a migration of barbarians led by fanaticism, greed, and lust. Since then, the Enlightenment take on the Crusades has gone in and out of fashion. The Crusades received good press as wars of nobility (although not religion) during the Romantic period and the early twentieth century. After the Second World War, however, opinion again turned decisively against the Crusades. In the wake of Hitler, Mussolini, and Stalin, historians found war of ideology–any ideology –distasteful. This sentiment was summed up by Sir Steven Runciman in his three-volume work, A History of the Crusades (1951-54). For Runciman, the Crusades were morally repugnant acts of intolerance in the name of God. The medieval men who took the cross and marched to the Middle East were either cynically evil, rapaciously greedy, or naively gullible. This beautifully written history soon became the standard. Almost single-handedly Runciman managed to define the modern popular view of the Crusades.

Since the 1970s the Crusades have attracted many hundreds of scholars who have meticulously poked, prodded, and examined them. As a result, much more is known about Christianity’s holy wars than ever before. Yet the fruits of decades of scholarship have been slow to enter the popular mind. In part this is the fault of professional historians, who tend to publish studies that, by necessity, are technical and therefore not easily accessible outside of the academy. But it is also due to a clear reluctance among modern elites to let go of Runciman’s vision of the Crusades. And so modern popular books on the Crusades–desiring, after all, to be popular–tend to parrot Runciman. The same is true for other media, like the multi-part television documentary, The Crusades (1995), produced by BBC/A&E and starring Terry Jones of Monty Python fame. To give the latter an air of authority the producers spliced in a number of distinguished Crusade historians who gave their views on events. The problem was that the historians would not go along with Runciman’s ideas. No matter. The producers simply edited the taped interviews cleverly enough that the historians seemed to be agreeing with Runciman. As Professor Jonathan Riley-Smith quite vehemently told me, “They made me appear to say things that I do not believe!”

So, what is the real story of the Crusades? As you might imagine, it is a long story. But there are good histories, written in the last twenty years, that lay much of it out. For the moment, given the barrage of coverage that the Crusades are getting nowadays, it might be best to consider just what the Crusades were not. Here, then, are some of the most common myths and why they are wrong.

Myth 1: The Crusades were wars of unprovoked aggression against a peaceful Muslim world.

This is as wrong as wrong can be. From the time of Mohammed, Muslims had sought to conquer the Christian world. They did a pretty good job of it, too. After a few centuries of steady conquests, Muslim armies had taken all of North Africa, the Middle East, Asia Minor, and most of Spain. In other words, by the end of the eleventh century the forces of Islam had captured two-thirds of the Christian world. Palestine, the home of Jesus Christ; Egypt, the birthplace of Christian monasticism; Asia Minor, where St. Paul planted the seeds of the first Christian communities: These were not the periphery of Christianity but its very core. And the Muslim empires were not finished yet. They continued to press westward toward Constantinople, ultimately passing it and entering Europe itself. As far as unprovoked aggression goes, it was all on the Muslim side. At some point what was left of the Christian world would have to defend itself or simply succumb to Islamic conquest. The First Crusade was called by Pope Urban II in 1095 in response to an urgent plea for help from the Byzantine emperor in Constantinople. Urban called the knights of Christendom to come to the aid of their eastern brethren. It was to be an errand of mercy, liberating the Christians of the East from their Muslim conquerors. In other words, the Crusades were from the beginning a defensive war. The entire history of the eastern Crusades is one of response to Muslim aggression.”