Americans took to the street across the Nation.  Was Washington listening or hiding out?  I saw lots of people and no one admitting to be a politician.  Now that the people have found their voice perhaps Washington will wake up and listen. Our country needs statesmen who remember their oaths of office, the Constitution and the American people whom they service.

I was told there was a school guard prepared to show their colors for this event. They had to back-out contrary to their desires because they were told the Tea Party demonstrations were anti-government. 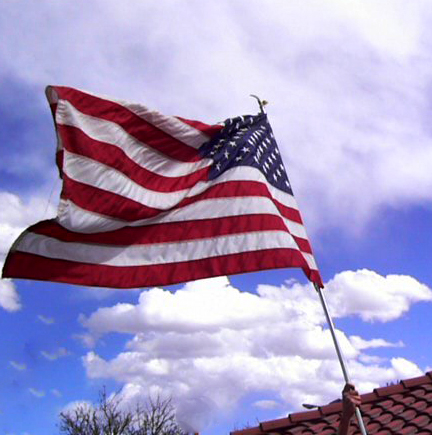 There were plenty of flags flown and worn and no shortage of people and spirit.  Horns blared and drivers-by gave thumbs up in full support.  The police were absent from the event.  Organizers were told they couldn’t be spared for the Tea Party event; budget restrictions, you know?  If only Washington could be so fiscally responsible.  I did see a police car amid the drivers-by.  He honked too!!

Praise God in Whom we trust and God bless America!

Ed Morrissey says the writing is on the wall.

Michelle Malkin has grassroots history of Tea Parties 2009 and great pictures of the events across the Nation.

Michelle Malkin is making it easy to catch up on tea party history and doings for MSM who may have missed its grassroots beginnings.

Feb. 15: Keli Carender, who blogs as “Liberty Belle” spread the word about a grass-roots protest she was organizing in Seattle to raise her voice against the passage of the trillion-dollar stimulus/porkulus/Generational Theft Act of 2009. It’s the first time she had ever jumped into political organizing of any kind. She is not affiliated with any “corporate lobbyist” or think tank or national taxpayers’ organization. She’s a young conservative mom who blogs. Amazingly, she turned around the event in a few days all on her own by reaching out on the Internet, to her local talk station, and to anyone who would listen.

Feb. 16: An energetic crowd of about 100 people came downtown to lambaste the Chicken Little process and the lard-up of the stimulus bill:

Word of the Seattle protest spread across the blogosphere. Readers suggested there should be a Denver protest on Feb. 17 to greet President Obama for the porkulus signing. Separately, the local chapter of Americans for Prosperity was already working to put something together on the fly. I met the head of the state AFP for the first time on the steps of the Capitol. No conspiracy here, tinfoil hatters. It was a union of like minds in an impromptu show of outrage against the legislation-without-deliberation process in Washington. Also there: Jon Caldara of the libertarian Independence Institute on one end of the spectrum and Tom Tancredo on the strict immigration enforcement end (hundreds of the protesters were mad about the absence of E-Verify standards for the stimulus funding):

More big-money conspiracy! I promised to bring a roasted pig. Paid for out of pocket. No corporate lobbyist pitched in. Tasted great and worth every penny:

Speaking of pigs, you can’t leave out the tax-and-spend revolt campaign against Chuck Schumer in response to his arrogant statement that only the “chattering classes” cared about the “teeny, tiny” pork amendments in the Generational Theft Act. Local radio host Leland Conway in Kentucky called on listeners to send Schumer pork rinds. A mountain of 1,500 bags poured into the station on Feb. 16 and was shipped to Schumer:

and we can’t forget Santelli’s rant which tapped the American pulse:

Obama is a leveler. He has come to narrow the divide between rich and poor. For him the ultimate social value is fairness. Imposing it upon the American social order is his mission.

Fairness through leveling is the essence of Obamaism. (Asked by Charlie Gibson during a campaign debate about his support for raising capital gains taxes — even if they caused a net revenue loss to the government — Obama stuck to the tax hike “for purposes of fairness.”) The elements are highly progressive taxation, federalized health care and higher education, and revenue-producing energy controls. But first he must deal with the sideshows. They could sink the economy and poison his public support before he gets to enact his real agenda.

The “side shows” are the credit crisis, which , and the collapse of the U.S. automakers. Tim Geithner now wears the credit crisis as an albatross around his neck while Obama may come to rue his despotic intervention into the car business. Krauthammer doubts that this intrusion will leave lasting effects on our nation saying only, “Some find in this “descent into large-scale industrial policy a whiff of 1930s-style fascist corporatism.”

Obama’s real agenda is another matter in Krauthammers view:

Bizarre and constitutionally suspect as these interventions may be, the transformation of the American system will come from elsewhere. The credit crisis will pass and the auto overcapacity will sort itself out one way or the other. The reordering of the American system will come not from these temporary interventions, into which Obama has reluctantly waded. It will come from Obama’s real agenda: his holy trinity of health care, education and energy. Out of these will come a radical extension of the welfare state; social and economic leveling in the name of fairness; and a massive increase in the size, scope and reach of government.

I mention Charles Krauthammer’s observation because I find it very troubling that as busy as constitutional scholars were during the Bill Clinton impeachment days, we hear little from them now.  History should have taught us what times of national crisis especially collapse have wrought in a nation which has been otherwise civilized. For example, Richard J Evans who wrote of Hitler’s endgame in his just released The Third Reich at War states that in of a previous book of his trilogy, The Coming of the Third Reich :

“I’m trying to be comprehensive, to show Nazi Germany and Nazi society at war in every aspect. In addition to the much better known military aspects, I try to deal with culture, literature, the arts. And I have human experiences — diaries, letters, personal testimonies.

In “The Coming of the Third Reich,” I try to say that it was not inevitable while pointing out that the Weimar Republic did, in fact, bring Nazism. The crucial point to remember is that in the 1928 elections, Nazis scored less than 3% of the national vote. By 1932 they were by far the largest party, with one third of the vote. So it’s the Depression. More than one third of the work force is unemployed by the middle of 1932. Businesses have crashed; banks have bankruptcies; people are disoriented by terrible inflation. It’s a desperate situation. And in that situation, the sense of activism, dynamism, youth, vigor, and radicalism that Hitler and the Nazis conveyed, tapping into nationalist resentment about the Treaty of Versailles with vague but vehement promises to restore Germany to its greatness…. All that had an irresistible appeal.

In “Can it happen here” (read the comments too!) Bookworm writes:

“…it’s worth noting that, when Hitler came to power in 1933, he did so with just barely more than 50% of the popular vote.  There was never a time when the majority of Germans were members of the Nazi party.  For most Germans, right through the end of the War, their crime wasn’t active complicity with Nazi atrocities, it was passive complicity.  From a mixture of fear and brain washing, they just went along.

The Anchoress writing of lost freedom and persecution, wonders how much American will tolerate before realizing that freedom “is lost in increments and inches.”

As the magic that unleashed a relatively unknown Barack Hussein Obama onto the political scene and now world scene, do we really know what we have unleashed.  Changes has come so quickly and gone unchallenged by any in a position to slow them down or investigate them such as our Congress who should be the voice of balance for the Nation.  As I asked before where are the voices of our constitutional gurus? For that matter, where is our Congress and its role of checks and balances. What will the out to lunch Congress cost us?

Tea Party Protests gives you the video low down on the doings.

I’ll get to the dream, but here’s how I got to it. I’m on a religious bent this morning.  Always happens after mass.  Something got me thinking of what “Lioness” means to me,during the sermon.  You know how sermons go, you hear the sermon and the Holy Spirit at the same time.  Sometimes the Spirit goes beyond the sermon and so today I ended up recalling a dream.  When I got home and read the Anchoress’ dream appeal from Nice Deb, I thought more about that dream I had years ago. Nothing, by the way, like Nice Deb’s flash-tastic graphic.

By profession, I’m a registered nurse.  Working the wards as a student at night was always a cause for anxiety.  Later on, working sprawling hospital wards as charge nurse also made me feel a bit insecure, too many patients, too many rooms.  IV’s could be running out or someone in trouble.  We didn’t have all the fancy monitors they do nowadays.  At night my anxieties would speak up in dreams.

The dream I remembered today went like this: I was on a hospital ward, and the ward was immense (though in my dream the ward looked more like a castle) and the halls seemed endless.  Suddenly, I was aware of a great lion roaming the passage ways. Now, in my dream, the ward/castle became even bigger, extending to several floors above and below.The lion prowled like a monitor.  His appearance seemed threatening, but instead of fear, I was flooded with a profound sense of security.  End of dream!

In those days my life was in a bit of flux, with husband in  school, me , with two children to care for,  living with my in-laws, and working nights in a newborn intensive care unit. Waking from the dream I wanted to know who the lion was.  I prayed and them opened the bible to a page with the phrase, “Put in my mouth persuasive words in the presence of my husband the lion” Esther C:  24.  I was ecstatic!  That day, I took it to  mean my husband Jim would take care of us with God’s help.  In other words, “Not to worry.”

Since the Lord speaks on many levels, and with multiple meanings, in this day I think the Lord is saying, “I am your Husband the Lion who guards and protects the passages of your life.  You are my bride, my castle.”

Why do I doubt this administration, the numbers and their hype?  The Anchoress passes this on for  clarity :

Ace of Spades HQ turns on the light with thanks to Jack Shaw: